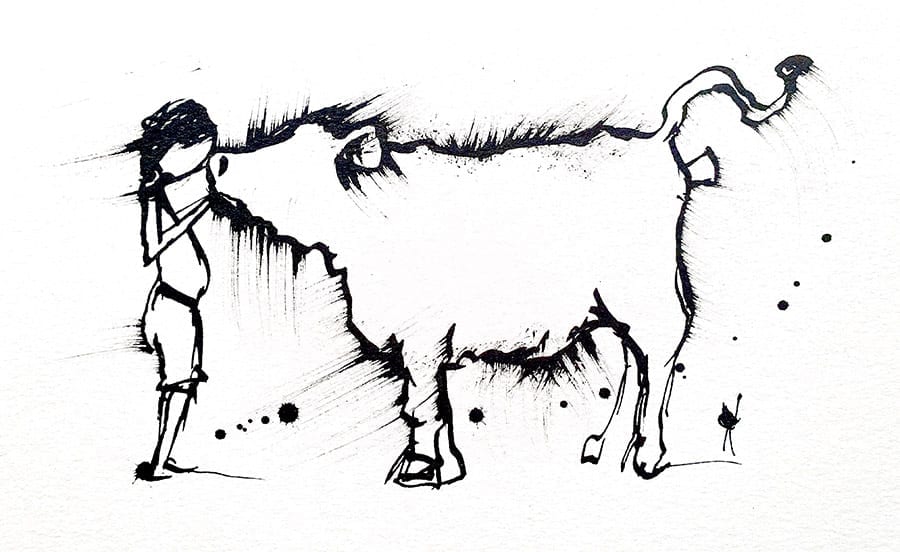 Or is art a conduit to the world's truths?

In ancient times art documented the way of life and helped with communication and education. It has not fallen by the wayside with the introduction of books and technology that replace past these purposes but morphed into something even more powerful. These days it can keep us sane, entertained and even strengthen our memories and spirit. No one truly buys art just because it matches the drapes. Nowadays art is the one place you can express yourself uncensored. To truly get a grasp on mankind’s state of mind at any point in history, you only have to look at the arts.

Art is like a subconscious mirror, it reflects our moods, surroundings, emotional state and events in our lives.

Taking a clear example from modern times, after the end of WW2 societies embraced a consumeristic culture – a trend often called “post-war consumer boom”. And what did the subconscious of the broader community feel about this? The creation of pop art tells us there was a growing dissatisfaction with the widening gap between the haves and have nots. Pop art blurred the lines between high art and low culture. It kind of became a rebellion against conformity and mass consumerism.

Looking individually art also tells a personal story of the artist entangled with world influences. I Can literally map out my state of mind for my whole life by just observing the changes in my art styles and subject matter over the years. It’s not forced, or intentional, it has just evolved that way.

1982
As a child I painted and drew all the Fuzzy animals, realistic unemotional copies. There was no style or individuality, just me taking in what I was told, the truths. I was raised in a large family of 8 and it was  at the time when kids where just that, not to speak unless spoken too. There was no discussion about world events, we were shielded, and as such my art of the time reflected that in its innocent simplicity. 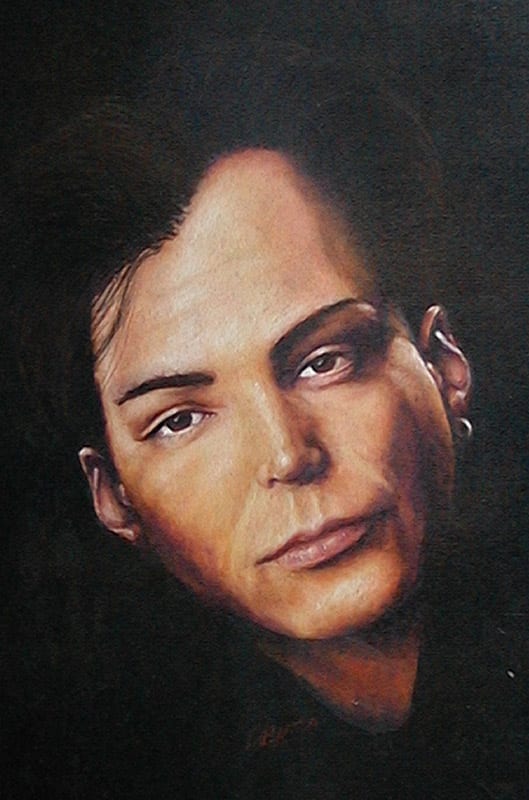 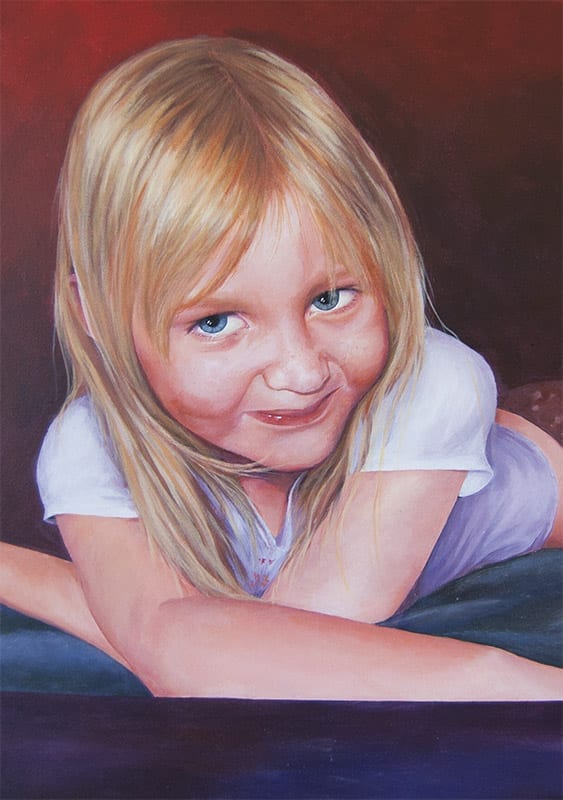 1988
Leaving home for university at 17 was like being thrown into the deep end. I was still doing detailed realist artwork in my portraits, but that was just for some cash. My first real artworks that I ever did was of pained distraught characters. They had a serious venerability about them. There is also a hint of social topic. In the early 90s the debate on abortion came strongly into public view. No, the discussions didn’t directly affect me, and you can tell from the art as they are not emotionally sensitive but more crudely conflicted. 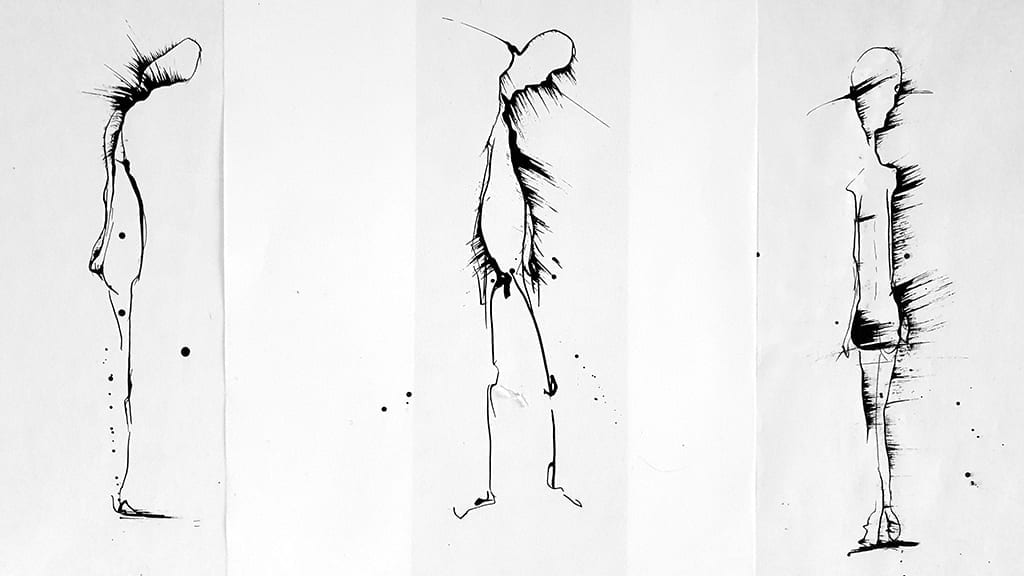 1991
If leaving home was like the deep end of the pool, moving to the city was like falling through the crack at the bottom of the pool. So many possibilities and opportunities that you find yourself crawling into a hole and letting the Flood of emotion wash over you while you gather your wits. My drawings became darker, and a tangled mix of Fantasy and passion in rich oil pastels.

It was a time of experimentation, and a search for self with no guide but my thoughts, and the city environment. 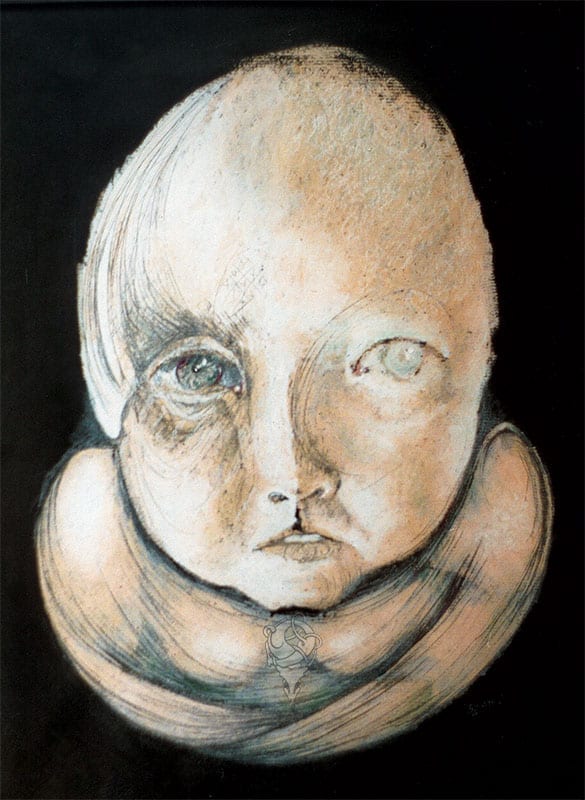 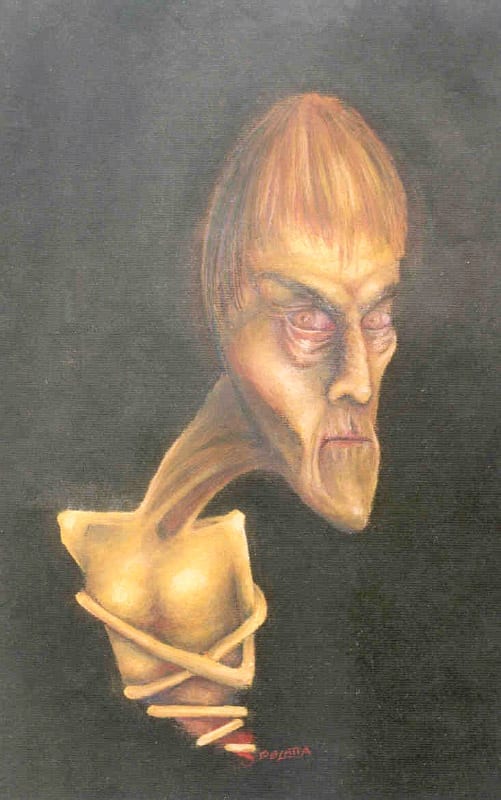 1994
After flip-flopping from dead-end jobs, I landed at Walt Disney Animation Australia. The light-hearted characters lifted my subject focus to humorous, and quirky creatures of a much softer spirit in pencil. My drawing style virtually exploded into an exploration of the imagination, and how mood and emotion can be expressed more freely without being confined to structured reality.

The focus was Fantasy and coincided with the time when the world was opening up with the internet and with it came the pressures of information overload. 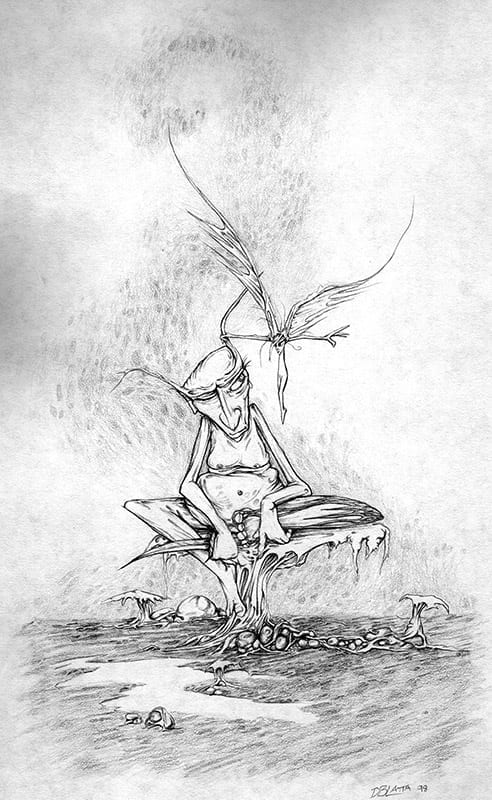 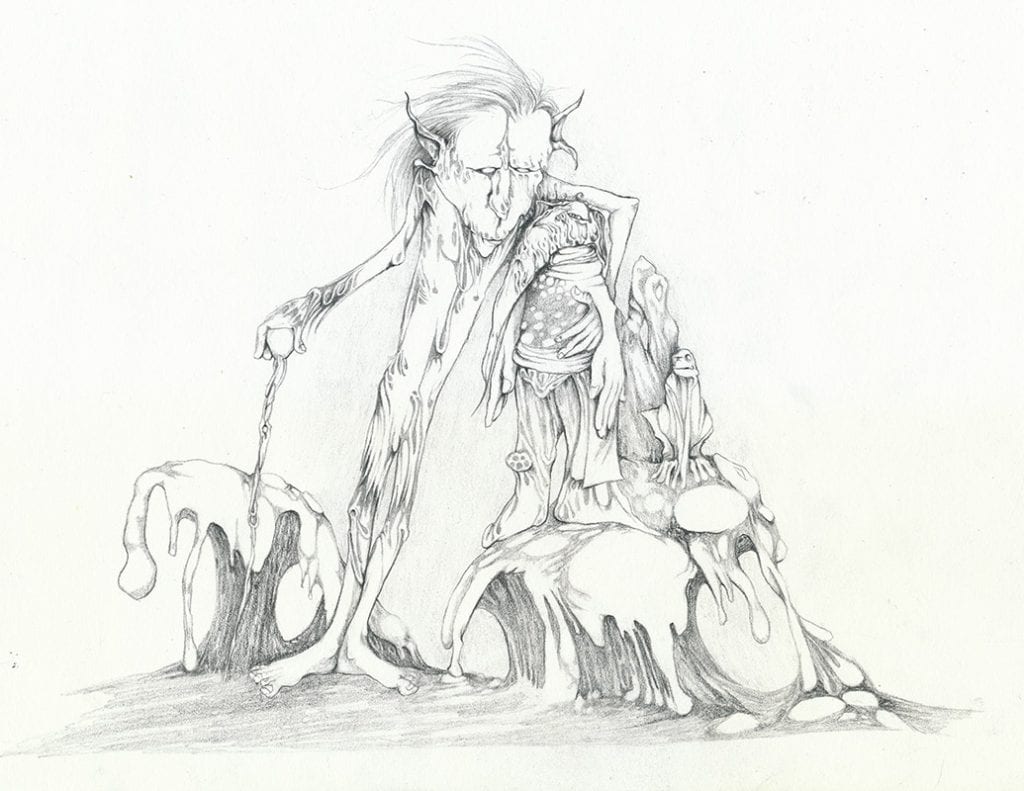 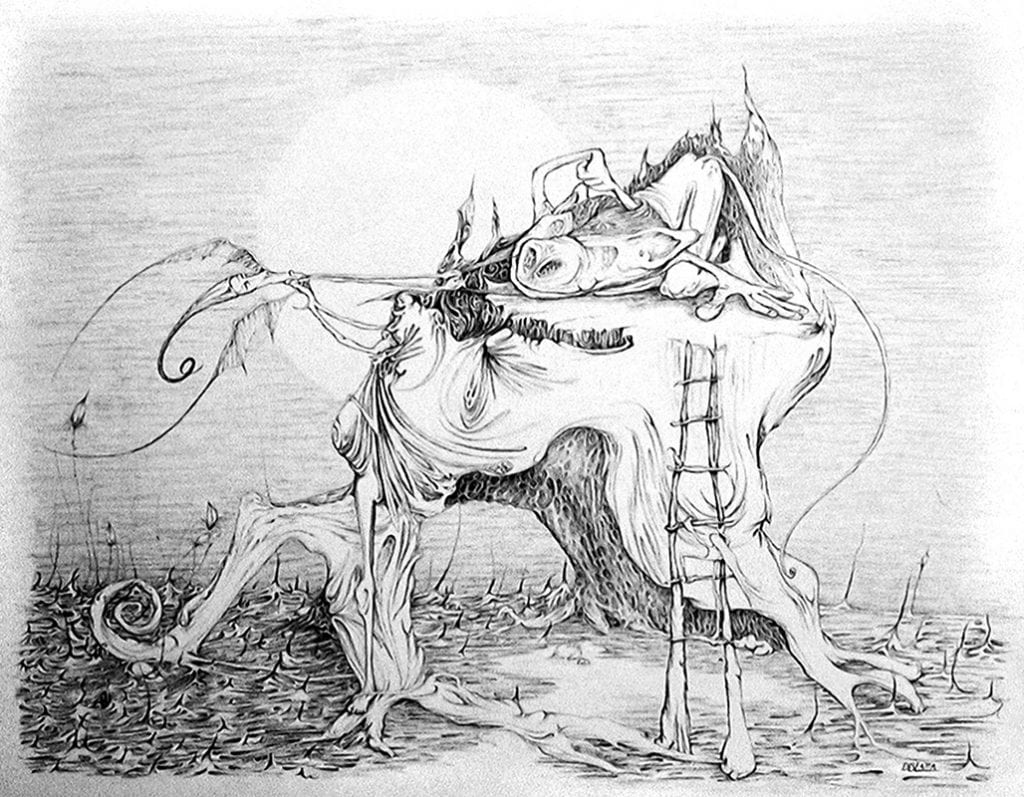 2016
More recently after a gap for raising babies, with the influence of our hobby farm and young kids, my works are cute, whimsical and sometimes even comical. This leads into today…Artworks are a reaction to the uncertainty of life in a COVID 19 world. The artworks are an almost nervous giggly response of humour and emotion. But what shapes these reactions in today’s environment? Perhaps the media can be included under the arts umbrella as well with their ability to spin a yarn.

Has the media killed us off already?

As our supposed narrator in life’s saga they are going all out and thriving on the panic. I mean, we don’t have any real movie or rock stars for the media to help us live our lives through.

Are our lives really so mundane and starved for drama? Or are the government’s of the world grabbing onto the power trip of saving us and the media is going along for the ride?

Its not just visual arts, all art forms are an expression of societies spirit of the times. We have been obsessing over the end of the world or life as we know it for as long as I can remember, and if you take into account Jesus and that book, well before that I guess. When I was young it was the atomic bomb and The Day After education…… and was that the one where they were eating people to survive? Probably mixing a few movies together, easily done. And what about the enlightening Gorge Orwell’s big brother novel. Then I think it was a meteor striking the earth not unlike the one that caused the extinction of the dinosaurs…what was that sloths name.

Creatives are forever taken aspects of reality and blowing them up exponentially with worst case scenarios into blockbuster movies, like the one with that dam monkey.

More recently global warming was thrown at us with such ferocity that we were to believe there would be no life for our children if we don’t put a cork in Cleo’s but….Cleo is our ageing and much loved family pet cow. Somehow global warming Morphed into climate change when our eyes started to glaze over…..I can imagine them in the hallways in a hushed voice….psss do you think they noticed. The voice of our children’s future, a girl in a boat that had her crew “fly” over to sail back across the ocean because she didn’t want to “fly” as it was bad for the environment….um….

You will notice I skipped the alien invasion…..

The arts industry perhaps has a lot to answer for our hysteria as well….but along with tourism we are certainly suffering more than most. Shoved in the non-essential box like the pleasures, expression and enjoyment in life are not important….

The world has responded to the COVID crisis like it’s the walking dead coming down on our reality. The truth is, the figures show that the chance of a under 65 otherwise healthy person dying of COVID is 0.06%

Now of course one death is too many….but did we really need to shut the world down? What’s that old saying? I could step outside and get hit by a bus tomorrow….actually probably not because your not allowed to leave your room

Of coarse it’s always easier to look back and judge after the fact, and I guess it’s good to practice, as long as it’s not your livelihood that’s been obliterated ….perhaps it may have been better to Protect those that are susceptible and let us get on with our lives. If we get sick so be it, we are not allowed to use any more bubble wrap anyway, it is bad for the environment.

Main artwork is : ” For the Good of the People”